One from the Junkbox...

When I demoed a few projects at the recent Maker Faire NC, I also brought along a loose box of projects for people to paw through. (The little kids loved 'em. Nothing puts out an eye like an 0.1" header.) Most of the stuff was old XuLAs and StickIt! motherboards and modules. But the one most people asked about was just an unpopulated PCB I'd designed back in 2011 and had never gotten around to doing anything with. (That's one of the unexpected consequences brought on by companies like Itead: you can make a PCB for a project and, because it's so cheap, you don't care if you never finish it.) <<more...>>

It's the Same Size, Only Bigger! 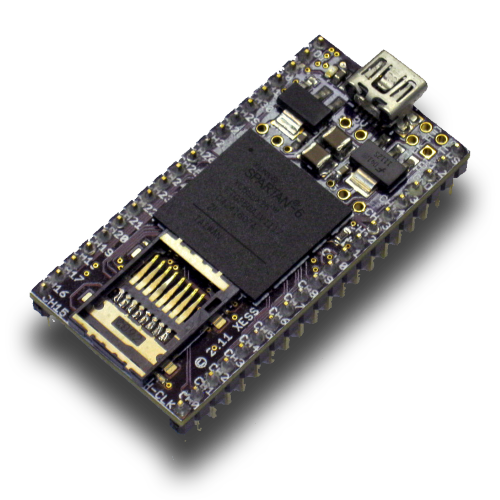 Well, I finally finished testing the XuLA2 prototype a few days ago and released the PCB to manufacturing. When I layed-out the prototype, I butted the microSD socket right up against the FPGA in order to keep the board at 2" x 1". I knew that wasn't going to fly for final production, but I wanted to get it done quick so I could find the other gotchas that typically occur when I move to using a different chip (in this case, the Spartan-6 FPGA).

It turns out there was a gotcha involving the strength of the Spartan-6 pullup resistors, but that was easily resolved once it was finally found. So the only change needed on the board was to find a way to fit the socket on there. <<more...>>

I wrote my first blog post for FPGARelated.com yesterday. It's about augmenting Notepad++ to speed-up VHDL coding. So go on over and check it out. I get paid a dime for every unique pageview, and I could really use some of those dimes right now! <<more...>>