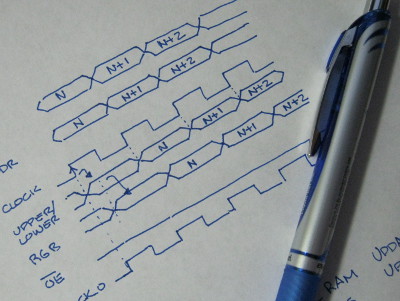 If you do electronics design, especially digital circuits, you'll eventually find yourself drawing timing diagrams showing the clock, control and data waveforms. They help you clarify the sequencing of data and control signals as they pass through your circuit. They also serve as valuable documentation to others who might use your design later.

Unfortunately, timing diagrams are painful and time consuming to draw. They're also a pain to keep up to date as you modify your design. So they fall out of sync with your current prototype, at which point they no longer help the design process (and can, in fact, hinder it by propagating a false view of how the circuit operates). Then you have to try and update them at the end of the project, probably misremembering a few details along the way.

It would help if there was a simple way to describe timing waveforms instead of trying to draw all the fiddly bits using a generic drawing program. This is where WaveDrom comes in. It uses a simple JSON syntax like this:

The waveform objects that make up the timing diagram are contained in the signal:[...] JSON array. In the simplest case, each waveform object has a name field and a wave field. The value in the wave field is just a string of characters where each character represents the logic level of the wave during a single time slot. The meanings of the characters are as follows:

Probably the most used character is the period, which just repeats the last value of the waveform. For example, wave: 'p....' would draw five, consecutive, positive-polarity pulses like so:

Or wave: '1..0...=.' would draw a waveform that is high for three periods, low for four periods, and then displays a bus value for two periods like this:

Note that using the period is not the same as just repeating the character. Here's what the previous example looks like if you use wave: '1110000==' instead:

It's nice to be able to label waveforms for digital buses with the values they carry. That can be done using a data field whose consecutive values are inserted into the bus waveform as each = sign is encountered. For example, this wave: '=..=...=.', data:['N','N+1','N+2'] results in this:

I've only shown a fraction of what WaveDrom can do. I haven't even touched on these features:

You can learn more by reading the WaveDrom tutorial. There's even a live WaveDrom editor page where you can type in JSON code to try out the various features.

If you decide you like WaveDrom (and, really, who wouldn't!?), there are two ways to use it. The first is in an off-line mode for generating timing diagrams to include in your documents. First, download an archive of the WaveDrom editor for your particular OS. Unpack it into a directory and run the executable. Then you can type in JSON code and see the resulting waveforms just like you did on the live editor web page. You can export your timing diagram as either a PNG image or as an SVG file. The interesting thing is that you can open the SVG file with a graphic editor like Inkscape and modify the drawing. This is useful if there is some formatting you absolutely need that WaveDrom can't provide.

Next, place the following call to the timing waveform rendering function at the bottom of your web page:

Then you can draw a timing diagram anywhere in your page by inserting JSON code inside a <script type="WaveDrom">...</script> bracket like this:

After you reload the web page, you should see the same figure shown at the beginning of this article.