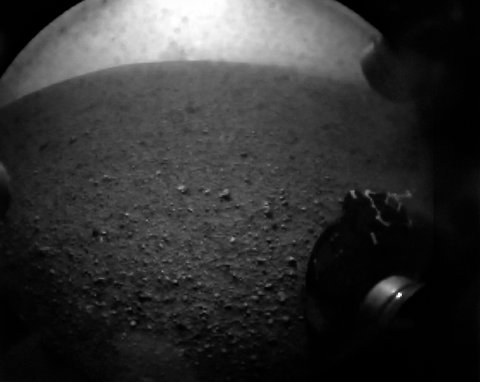 OK, that's out of the way. Now I want to respond to some of the dumbass comments I saw on Twitter and the NASA Ustream last night.

My engineering job is so boring/meaningless compared to theirs!

Answer: most of them.

The fact is, if you took a video of an average MSL engineer's work day and showed it side-by-side with your work day, you probably couldn't tell the difference. Thinking, calculating, writing docs, talking on the phone, sitting in meetings, watching cat videos on Youtube... Their end goal is more grand, but they get there using the same tools and techniques, struggling against the same constraints (money, time, power, etc.), and cooperating within same unfathomable bureacratic hierarchies as the rest of us.

So if your job is meaningless or boring, it's that way because you choose to view it that way. You could apply to NASA, maybe even get a job there. But within six months, you'll feel the same damn way about what you're doing. Your problem is internal. Moving from one large, bureacratic organization to another is not going to fix that. (And moving from a small, self-empowered organization to NASA is really not going to fix that.) So work on your viewpoint, not on the view.

This has inspired me to up my game and do harder things!

For the most part, I think I'll just lump you in with those people who've decided to lose weight and exercise after seeing the Olympics. But good luck with that!

If you are part of the 3% who actually can make a lasting change in your behavior, then great! I hope you do stretch your abilities more than you have. But it makes me wonder why you haven't been, already.

This will inspire a new generation of engineers and scientists!

What it might do is inspire those who are already inclined toward STEM to stay with it, and that's a good thing. But if your only motivation to pursue STEM comes from a large, public spectacle, then you're not going to stay with it for long.

I recall when the movie "War Games" came out with Matthew Broderick as a hacker who starts and then has to stop a nuclear war. It supposedly led to a good-sized bump in computer science enrollment in the mid-80s. Unfortunately, most of those students never reached the end of the educational pipeline. As one of them said in an interview: "Computer science is hard! Oh, and also boring!"

OK, let them take your money.

Has everyone forgotten how mismanaged NASA is? Space Shuttle? ISS? Hello?

I would posit that the MSL is succeeding because it has so little money. Only $2.5B has been spent spread over eight years (so far), which is almost unnoticeable within the total NASA budget. With a larger budget, they might have become another NASA political football kicked around and fumbled with by too many bureacrats and elected officials.

So if you want NASA to have more money, that's fine. Call your Congressman. But you may be painting a big bullseye on the very thing you want to promote.

(I don't have a good solution here. Certainly giving them less money isn't a good option, either.)

If you look at NASA's inflation-adjusted budget, it's been between $15B and $18B for the last quarter century. Whether the President/Congress are red/blue, blue/red, red/red or blue/blue, it hasn't made much difference.

The truth is that neither party cares much about NASA. What they do care about is which Congressional districts the NASA budget gets spent in. The party in power tries to divert funding to companies with NASA contracts in their districts. (As an aerospace engineer once told me: "Northrup does well with Republicans in power, and Boeing does better with Democrats.") This may lead to fluctuations in funding, but neither party wants to cut the gravy-train to their own districts.

So if you really see a Democrat/Republican split in the funding for NASA, then please come over to my house. I want to see if you can taste the difference between Coke and Pepsi.

I like his appreciation and enthusiasm for engineering and science and the way he projects that into the popular culture. He may truly be bringing kids into STEM who would normally be lost to it.

But I suspect he would pull his own eyes out if he ever had to spend ten minutes doing Spice simulations.